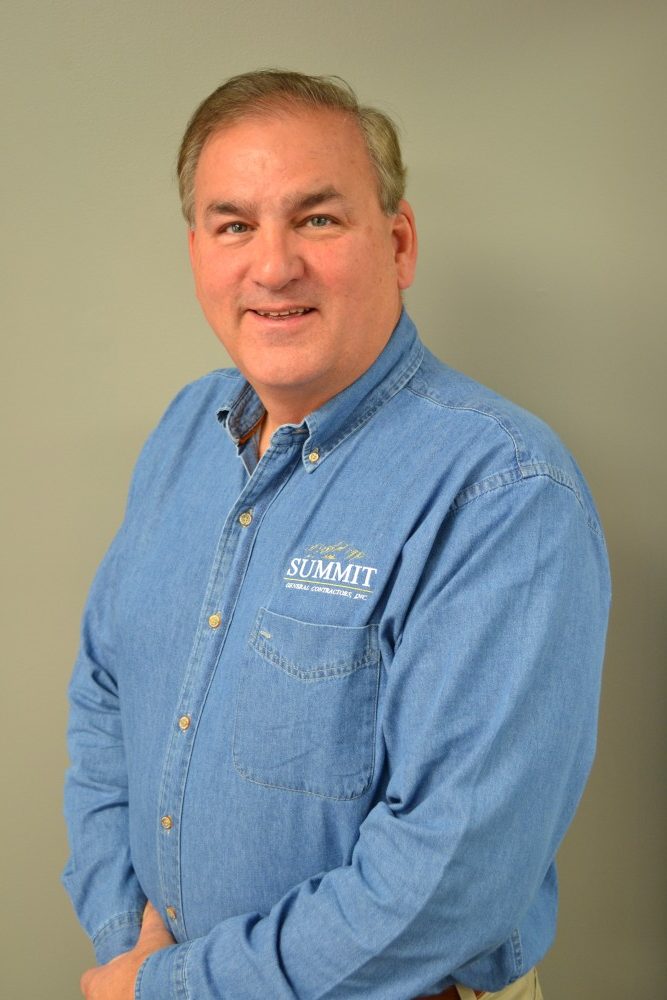 Steve started Summit General Contractors in July 2008. Opening a new construction company during a major downturn in the economy was a very difficult decision for him, although he had the determination, some clients, and the drive to become a successful contractor. Starting out with one general contractor license and four employees, Summit has grown each year in gross revenues and he has added employees each and every year since its inception. During the growth of the company over the last eight years, Summit has moved its operation two times (outgrowing the space) and has added more state contractor licenses. Currently Summit is licensed to do business in 23 states located throughout the Southeast and Midwest.

After graduating from high school, Steve enrolled into Speed Scientific School at the University of Louisville. He was a basketball player on the 1980 University of Louisville NCAA Basketball Championship Team and is a commissioned Kentucky Colonel. An honorary title given by the Governor of Kentucky. He also received the Award of Excellence from President Jimmy Carter at the White House. Without the constant travel, Steve took the opportunity to complete his degree and received an Associate of Arts Degree from Central Piedmont Community College in 1990. He also earned a Bachelor of Science Business Administration Degree from the University of North Carolina Charlotte in 1994.

In 1984, Steve began his career in retail as a Store Manager with Pic ‘n Pay Stores Inc. Within two years, Steve was promoted to Store Construction Coordinator and later moved to Texas building and setting out stores for this national retailer. Steve married the love of his life in 1987 and after 30 years of marriage, also successfully raised three awesome children. In 1988, Steve moved to Charlotte, NC as a Manager of Purchasing and Senior Project Manager for the same company. He coordinated construction activities for all chain stores and developed and coordinated a remodeling program for the 928 store chain.

In 1993, Steve changed employment and began a new career as the Director of Construction with the Cato Corporation. Within 2 years, Steve was promoted to Assistant Vice President of Construction. During his tenure at Cato, Steve directed an in-house staff consisting of Project Managers, Superintendents, Store Set-Up Crews, and administrative personnel. He also supervised a construction budget of approximately 5 million per year, developed a remodeling program for approximately 100 stores, and developed a construction policy manual.

In 1995, Steve was hired as the Director of Construction for Goody’s Family Clothing and was promoted to Vice President of Construction 5 years later. Steve oversaw a construction budget of approximately 45 million and worked directly with upper management, directors, officers, President, and CEO. Steve implemented the use of benchmarks for “Value Engineering” without compromising design intent, and implemented standards for scheduling, estimating, reporting, punch list and follow-up.

In 2002, Steve left retail for good and furthered his career as a Vice President of the Tennessee Division for a Southeast based General Contractor. Steve planned, negotiated, and implemented all aspects of the initial start-up for the Tennessee office. Steve successfully composed strategy based literature for the company marketing brochure and successfully targeted and acquired new customers by being selected as a preferred contractor with new developers and retailers. 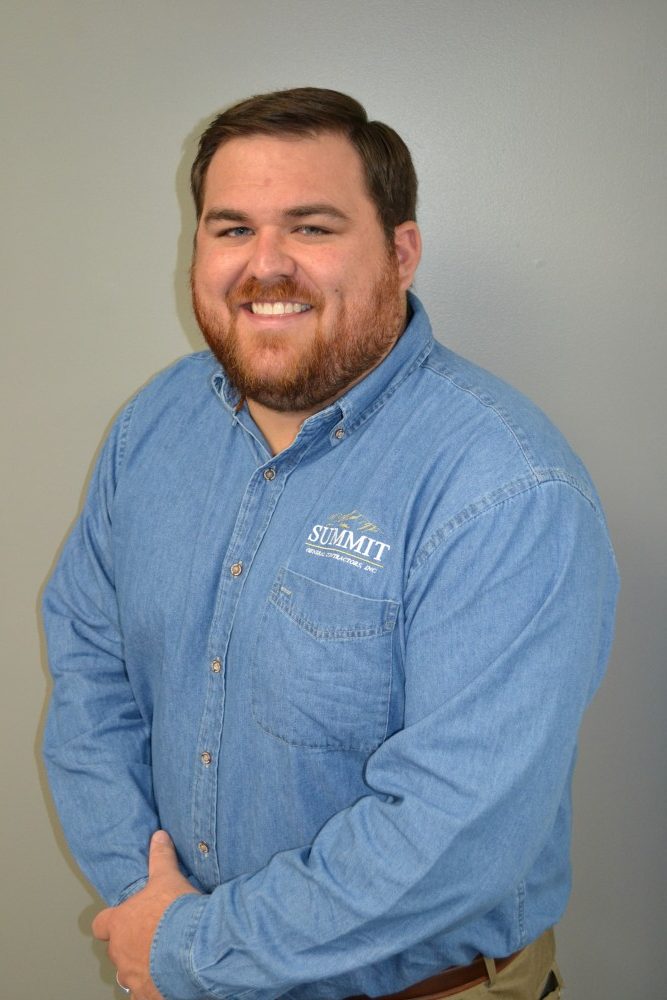 Tyler joined the Summit team in 2012 as a Project Manager. He was quickly moved to a financial and operational role for the company. As the Controller, he oversees the day to day financials, operations, and human resources for the company. Tyler works closely with the President, Project Managers, Project Assistants, and Estimators. Tyler is a graduate of Austin Peay State University with a degree in Business Management and Mathematics. He attended Austin Peay on a football scholarship and was a three year starter as an offensive tackle. After graduating, Tyler joined the football staff at Austin Peay as an Offensive Line Coach. Tyler is recently married and has no children. 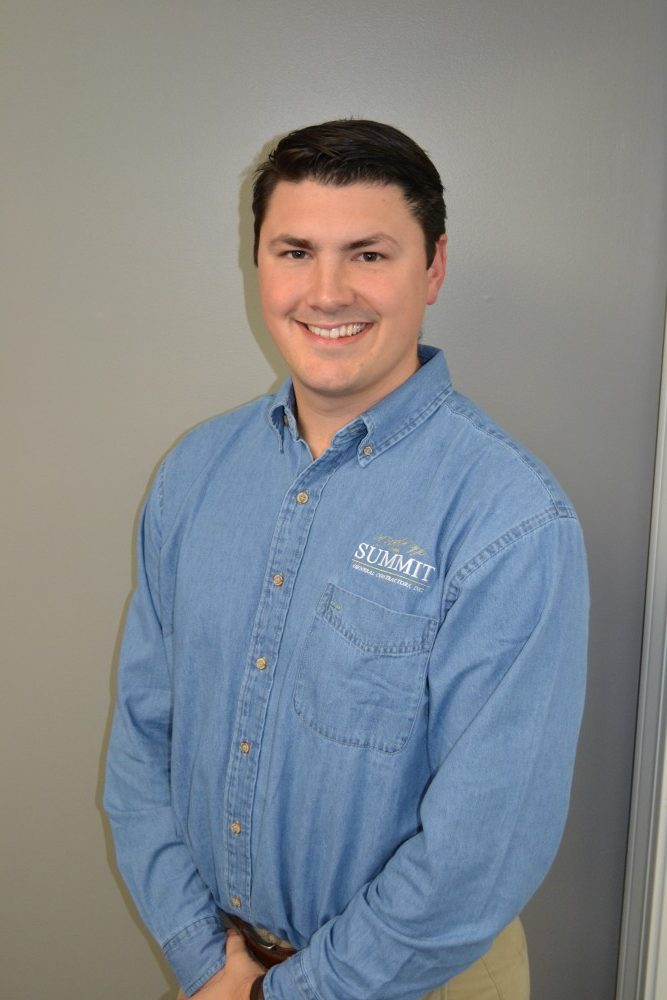 Tyler began his career at Summit in March 2014 after graduating from the University of Tennessee with a Sports Management degree. Tyler is a graduate of Oak Ridge High School where he excelled in sports leading his teammates in basketball and football while earning a college scholarship in basketball from Bryan College. Tyler gained his construction experience as a Superintendent while managing projects ranging from $10,000 to $1,000,000 and was promoted to a Project Manager in July 2015. Tyler enjoys playing with his son, spending time with his wife, family and friends, and avidly following the Vols! 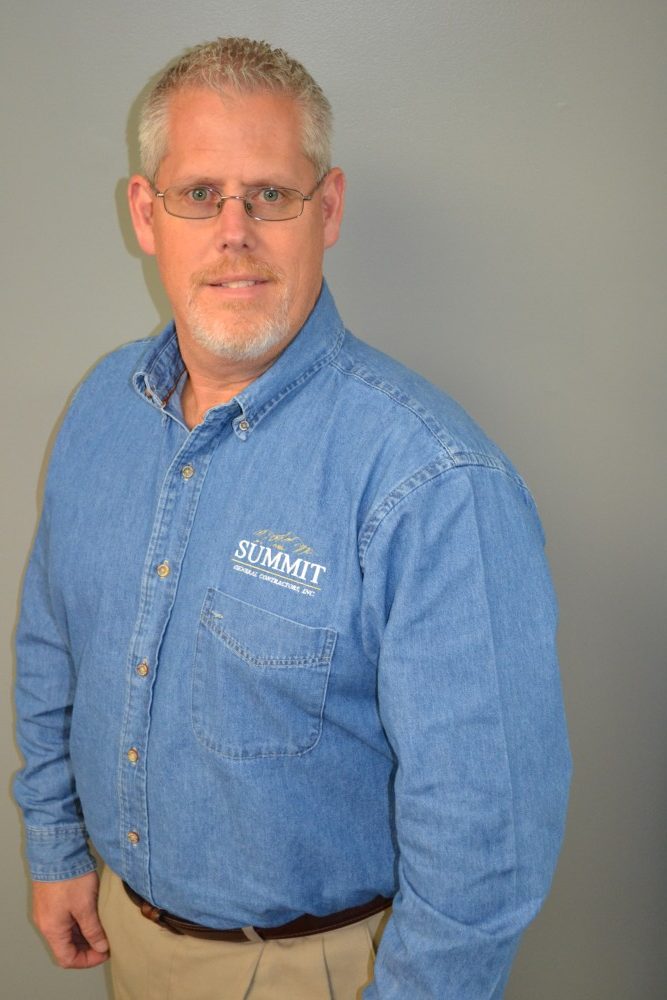 Darren began his career at Summit in 2012 bringing with him many years of experience in residential, commercial, industrial, and site development. Darren received an Associates of Applied Science in Construction/Architectural Technology and Associates of Applied Science in Computer Aided Design from SUNY at Alfred, NY. After college, Darren commenced his career in architectural design for 11 years and has worked over the last 20 years in commercial construction management. Darren also earned the recognition as an Eagle Scout with the Boy Scouts of America. He also serves a key role at Summit in Estimating as well as managing various projects for our National Retail clients. Darren has been married for 13 years and has three children. 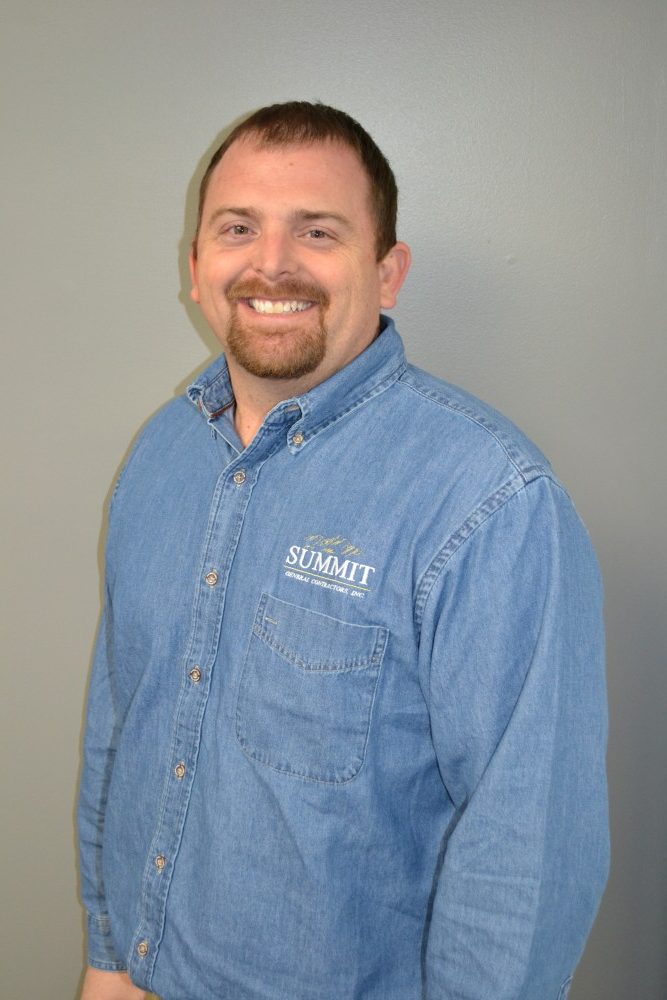 Mike started his career with Summit in June 2016. Mike has over 15 years of construction experience. He is a graduate of East Tennessee State University, in Johnson City, TN with a major in Construction Engineering Technology. Mike has led or assisted with various commercial ground-up projects, renovations, and additions. Mike has been married for 9 years and enjoys spending time with his family and playing golf. 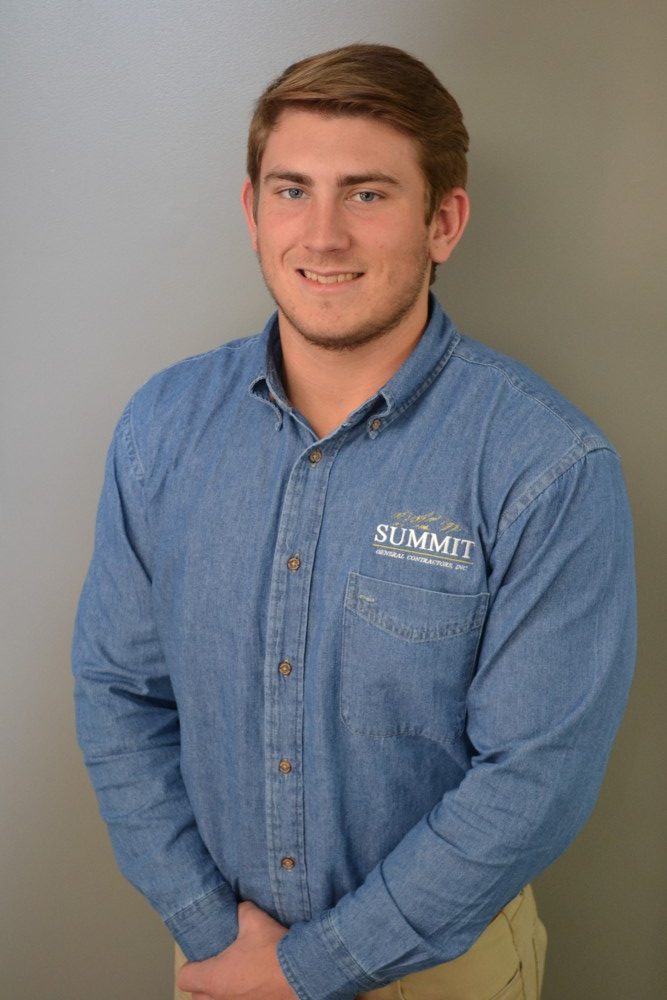 Camden joined Summit in July 2015 as an intern while attending college. Camden has been accepted at the University of Tennessee in the Environmental and Soil Science program with a concentration in Construction Science. His first role with the company was working in Estimating. Camden has excelled in this area and was transferred to his new role as Project Assistant. Camden’s goal is to learn all aspects of the construction industry and he plans work full-time for Summit after graduation. Camden enjoys working out, playing golf, and spending time with friends and family outside of work. 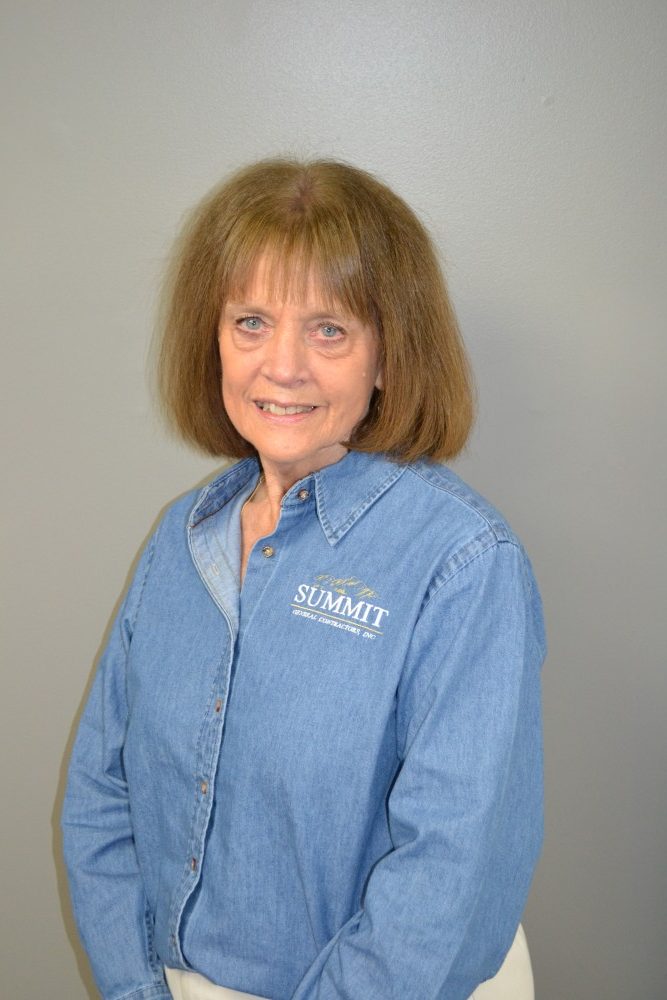 Cathleen joined the Summit team in 2010. She began her career as a Project Assistant and has moved into her new role as Receptionist. Cathleen is responsible for Subcontractor insurance and W9 certification, printing, processing incoming and outgoing mail, supplies, UPS and FedEx packages, filing, and answering the telephone. For 15 years, Cathleen worked with a major retailer and had ascended to Director of Property Management before they closed the business. Cathleen is a proud mother of two girls and a grandmother of three.

Copyright 2022. All Rights Reserved. Designed By The Visibility Method.